All Collections
For Artists & Representatives
Get ready 🚀
When should I send my music on Groover?

When should I send my music on Groover?

Written by Dorian
Updated over a week ago

The question artists frequently ask themselves is whether to send their music on Groover before or after its release. This complex question does not have a single or perfect answer, so it is important to have a few things in mind when planning your Groover promotion. This short guide will answer all your questions!

1. General overview: before or after the release?

Before starting a campaign on Groover, you need to identify the current phase of your project:

🔥 Plan A - Send your music when it comes out:

It's release day and your music has gone live on all platforms- it’s time to accompany it with a promotional campaign on Groover. Your goal: contact a maximum of influencers who can potentially share your music, integrate it in their playlist, program it on their radio, write an article about you or even sign you on their label.

This is an effective strategy because it allows you to contact a wide variety of influencers at a time that is convenient for you. These people are in a position to share your track immediately on platforms or social networks as it is already released, which increases your chances of getting visibility. It is important to note that the promotion of your music continues even after its release. This can be up to several months- or even years- after its release.

Remember to regularly remind people who follow you to go listen to your track, look for new contacts, create new relationships with different players in the music world- artists, producers, media / radio / labels etc. If they discover your music and fall in love with it even a year after its release, they will not hesitate to share it with their community. This can continue to attract more and more curious people and fans around your music!

🔥 Plan B - Send your music before the official release date:

💡 Tip: once you have entered all the information about your song, you will be able to access the list of all available influencers. By using the "Filters" option on the top left, you can easily navigate the different types of influencers available and thus adapt your campaigns according to whether you contact a label, a media or a playlist for example. 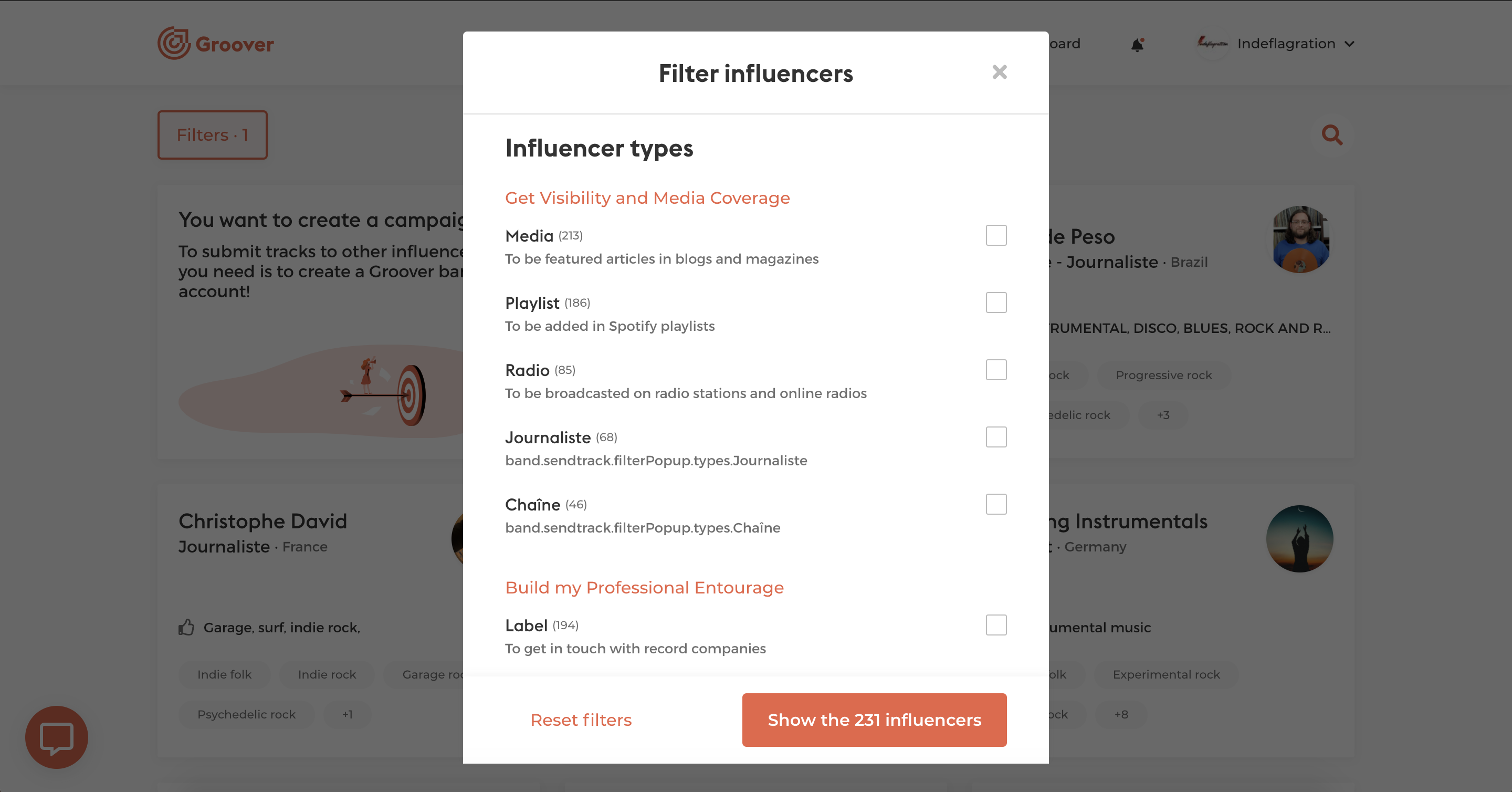 However, keep in mind that some influencers- especially independent playlists - are much more responsive and efficient when your music has already been released on streaming platforms like Spotify, Deezer, Apple Music etc. Consider excluding these influencers from any campaign you may be running pre-release day and wait until the track is available on streaming platforms before contacting them. You can also add the Spotify link in your track info at that time.

💡 Tip: You can prepare organized lists of influencers- via the little bookmark icon- based on promotion type or timing: "Before release" and "Day of release" for example. This will save you time! 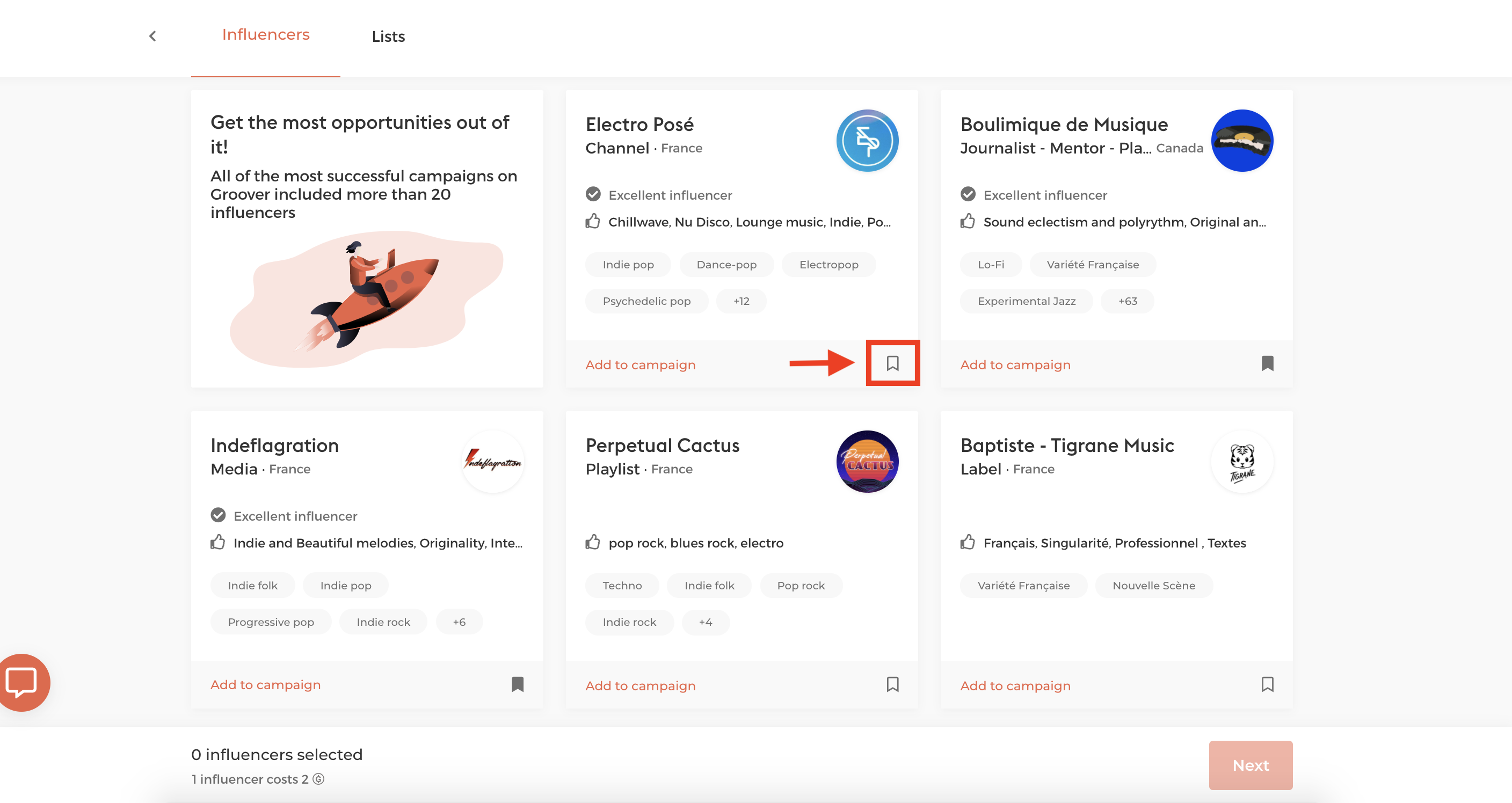 If you don't know where to start, we strongly advise that you send your music the day of its release or some time after. Contact as many relevant influencers as possible in order to give your song the visibility it deserves!

Are you only looking to get into playlists, simply boost your visibility, or contact labels? Here are a few tips to consider for each situation:

Your track must already be present on streaming platforms if you want to share it in a playlist. We advise that you launch your campaign after the release of your song.

When you want to gain visibility:

It is not necessarily better to send the track more than 7 days before the release, unless you plan to send the track / clip again on the day of its release. The timing of sharing / promotion on Groover is rather short, with exceptions for some magazines and journalists who need time to write a possible review if they like your song.

When you are looking for a label, manager, publisher, or touring company:

You can send your music whenever you want. If you are looking for a label for your upcoming project for example, the music should be sent as far in advance as possible. The goal is not necessarily to promote the project but rather to benefit from potential relationships with professionals who are always looking for new talents. For example, a good time to contact a label is around the release of a first single, in the perspective of the future release of an album. Don't hesitate to specify in the track pitch that you have the album demos ready. You can always send these later on request.

You can choose to put together a very precise campaign and in this case, the different tips, filters, and profiles of the influencers can help your strategy while optimizing your budget as much as possible.

You can also opt for a more general promotion strategy at the release of your song, which allows you to get an instant boost and make your music known to as many people as possible without wasting time ;) Filters can be very useful to save you time in your selection. We've noticed that the most successful campaigns on Groover all had more than 30 contacts, or often more. Trying things out on less obvious targets can pay off 😉

In any case, don't hesitate to start your promotion by being active on social networks and highlighting your artistic talent. We also advise that you fill out your profile on Groover and always make sure to specify your approach in the pitch of your song and in the personalized messages to influencers. Check out more specific advice on this subject here, showing you how to write the perfect pitch adapted to your situation.

Did this answer your question?